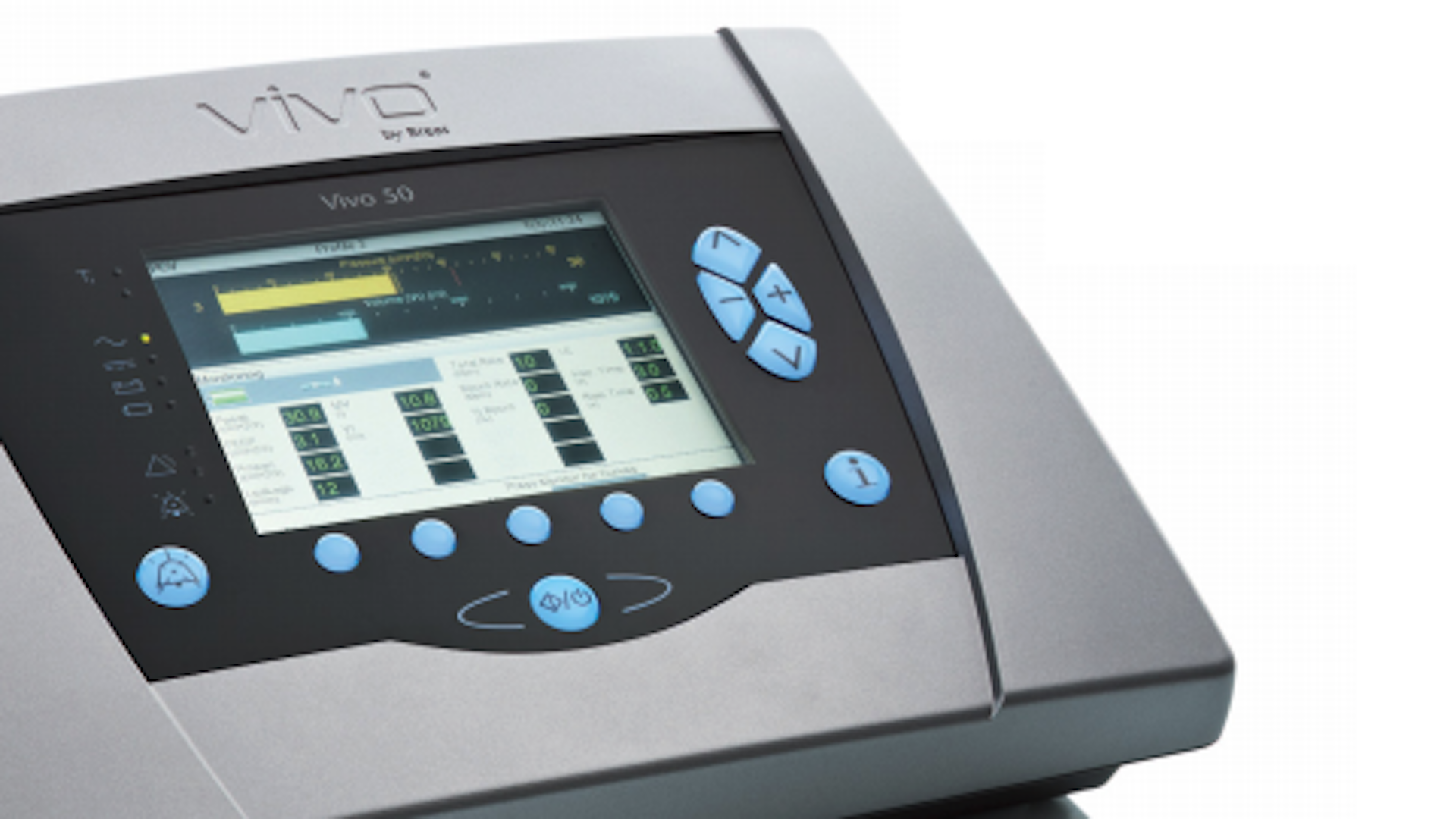 Usage of the Vivo 50 for Cystic Fibrosis Patients at Home: The All Wales Adult CF Centre’s Experience

The All Wales Adult Cystic Fibrosis Centre is based in Cardiff and cares for approximately 256 adult patients with Cystic Fibrosis who live across south and mid Wales. Our youngest patient is 16 and our oldest currently 72years. The physiotherapy team consists of 5 qualified physiotherapists, 1 exercise technician and 1 assistant. This was not always the case; in 2009 there was 1 physio and 1 technician for 180 patients. The physiotherapy team as it has grown has taken on more roles and is able now to offer a range of treatments including airways clearance and nebuliser advice and treatment, posture and exercise advice and training, sinus and continence assessment and treatment and non-invasive ventilation (NIV). Historically the team did not have the capacity to provide an NIV service so this was provided by specialist respiratory nurses who dealt with all kinds of respiratory and neuromuscular compromised patients requiring non-invasive ventilation.

How it all started …

Part of the historical problem when dealing with our patients whose respiratory health was declining was the inability to graduate onto NIV. Patients were only seen by the respiratory nurses and started on NIV once in acute respiratory failure which was during exacerbation, the patients were often close to extremis.

The patients were not familiar with the nursing staff, the machine or the mask and found NIV too difficult to tolerate and many refused to continue.

The physiotherapy team as it grew in size were able to take on the NIV service for CF patients and decided to use a graduated approach to NIV. This starts very early with some patients using the Vivo 50 (Breas Medical, Sweden) purely as an adjunct to airways clearance like intermittent positive pressure breathing (IPPB) long before they require NIV. As the patients’ respiratory health declines to the point where the patient begins to retain carbon dioxide the physio team would slowly introduce NIV via a mask for short periods during the day and then overnight and eventually if required as a bridge to transplant. Some patients have found benefit from exercising using a mouthpiece or mask and other patients have used the Vivo 50 with a mouthpiece in palliative disease to recover after short bouts of exertion such as coughing or mobilising to and from the bathroom.

Overview of the actual treatment program.

Despite a lack of clinical trials in Cystic fibrosis both the CF Trust and the BTS guidelines support the use of a trial of IPPB where the patient demonstrates respiratory muscle weakness, fatigue or retained secretions. The Cystic Fibrosis Trust (2011) states; ‘Intermittent positive pressure breathing provides intermittent positive pressure ventilation (on inspiration only) that augments tidal volume, and indirectly improves ventilation. There is no published evidence for the use of IPPB in cystic fibrosis. However, clinical experience suggests it is a useful adjunct where there is increased work of breathing/fatigue due to impaired secretion clearance, or atelectasis due to mucus plugging.’

At our centre the Vivo 50 is set up on a pressure support mode (PSV) with to start normally a low PEEP (approximately 2cmH2O) a low to moderate Inspiratory Pressure (approximately 15cmH2O) and a low inspiratory and expiratory trigger (normally approximately 3-4), the slope of the breath delivery (Rise Time) is set according to patient comfort. A leakage circuit with a mouthpiece is attached. The alarms are set where able to be ‘off’ with a minimum back up rate allowable (4-6bpm), this is because the patients are conscious and breathing at an adequate respiratory rate for their requirements. The equipment is an adjunct to augment deep breathing and reduce the work of breathing in the same way as other intermittent positive pressure breathing adjuncts. During the initial trial pressure support and PEEP are adjusted according to the patients comfort and to ensure good thoracic expansion and ease in the work of breathing if required. The Vivo 50 is then used alone or if necessary in combination with other physiotherapeutic adjuncts if required such as postural drainage, nebulised saline or hypertonic saline, percussion, forced expiratory technique etc. The same precautions and contraindications are applied to this device as other IPPB devices such as undrained pneumothorax, massive haemoptysis and recent thoracic surgery etc. At our centre the patient would normally have a chest x-ray as part of their assessment which would be viewed prior to the commencement of Vivo 50 to rule out the presence of pneumothorax.

Any patient that might benefit from IPPB is offered a Vivo 50 no matter what their disease severity, this has enabled the patients to see it like any other adjunct rather than previously as ‘is this a sign I am getting worse?’ Using the device as IPPB allows patients to become accustomed to the feeling of positive pressure and PEEP during a period of relative stability. We attempt to achieve this long before the patient requires non-invasive ventilation for either nocturnal hypoventilation or Type II respiratory failure. The patients normally use a mouthpiece when using IPPB and then slowly progress to a face mask when requiring NIV.

Patients use the device in a variety of ways; some might have a loan of a machine for the duration of a course of intravenous antibiotics as an inpatient or at home.

One of the advantages of the machine over ‘classical’ IPPB devices is that the machine plugs into the mains electric or runs on battery rather than source gas from an oxygen outlet. Another advantage of the Vivo is that it delivers room air or oxygen can be entrained allowing the patient to receive varying amounts of oxygen during their airways clearance, this can be of particular benefit if a patient is likely to retain Carbon Dioxide.

alternating monthly with Tobramycin Bd. She is intolerant of hypertonic saline due to wheeze. Patient A received intravenous antibiotics (Tobramycin 600mg Od and Meropenum 2g Tds) for 14 days with IPPB (Vivo 50) settings as follows:

On Room air (no oxygen entrained) this was combined with percussion as per her normal regime (after an initial first treatment trial) and was then continued twice per day during the admission.

At the end of two weeks treatment lung function improved; FEV1 2.99 (91% predicted) FVC 3.96 (106%) Chest x-ray (see X-ray 2) had also improved no other treatments had been changed during this time. At this clinic the Vivo 50 was discontinued and her normal regime was restarted. A month later at clinic follow-up patient A’s lung function was maintained; FEV1 2.91 (89%) FVC 3.89 (104%). The improvement in the patients’ condition cannot be attributed entirely to the Vivo 50 however the patient did report an ease of expectoration and the ability to deep breaths more easily when using the Vivo 50.

Patient B moved into South Wales from the South of England in Sept 2012 with low lung function (FEV1 21% predicted) she was not hypoxemic or hypercapnic at rest but did desaturate on exertion and required supplemental oxygen almost immediately. She did not desaturate overnight and was not hypoxemic or hypercapnic in the morning. She did get breathless (although did not desaturate) during airways clearance which consisted of PEP mask but found no other form of airways clearance beneficial. Patient B was resistant to inpatient stays for intravenous antibiotic treatment although did agree to admission June 2013 when IPPB (Vivo 50) was first introduced. She was started on; Pressure support mode (PSV) with leakage mouthpiece

On Room air (no oxygen entrained)

Patient B maintained SpO2 during short treatment sessions on the Vivo 50 (approximately 15 minutes) and she described expectorating more sputum using the Vivo than the PEP mask. She preferred the Vivo 50 as she found it less ‘hard work’ than her PEP mask, and was therefore sent home with a machine on loan. At this time she did require overnight oxygenation but was not hypercapnic in the morning. In October 2013 patient B was admitted with infective exacerbation, very low SpO2 on 2 litres of oxygen via nasal cannulae, and type II respiratory failure (pH 7.31, PCO2 11.9 PO2 10 HCO3 37 Base 16 on FiO2 35% face mask) and NIV on the Vivo 50 was commenced with a face mask settings as follows:

Despite arriving in respiratory distress the patient tolerated NIV very well and immediately began to use overnight and at the end of a long admission took the Vivo home to use for both NIV and IPPB. Patient B used different settings and interfaces (as above) for airways clearance and NIV, she also used the IPPB mode to recover from short burst of exercise. So the patient would use a mask and profile 1 (settings above) for NIV and mouthpiece and a different setting under profile 2 for airways clearance and exercise (the profile 2 settings were the same mode; pressure support mode but with a higher insp pressure (26cmH2O) and a quicker rise time (2) and on occasion oxygen was entrained at 2lO2 flow per minute. Patient B survived 2 further severe exacerbations over requiring NIV for long periods during the day as well as NIV all night and received a successful lung transplant in January 2014

The Vivo 50 may in some patients be a useful physiotherapy adjunct that performs much like an IPPB having a similar theoretical physiologic impact; it therefore has the same indications and contraindications for use. The advantages of the Vivo 50 include its portability (it can be used at home) and it may help patients transition slowly into non-invasive ventilation. It can be used in a dual mode way (Profiles) with a mouthpiece on one setting for IPPB and for non-invasive ventilation via a suitable interface in another setting. Oxygen can be entrained or not and therefore may hold advantages over IPPB devices for patients who may be at risk of retaining Carbon dioxide 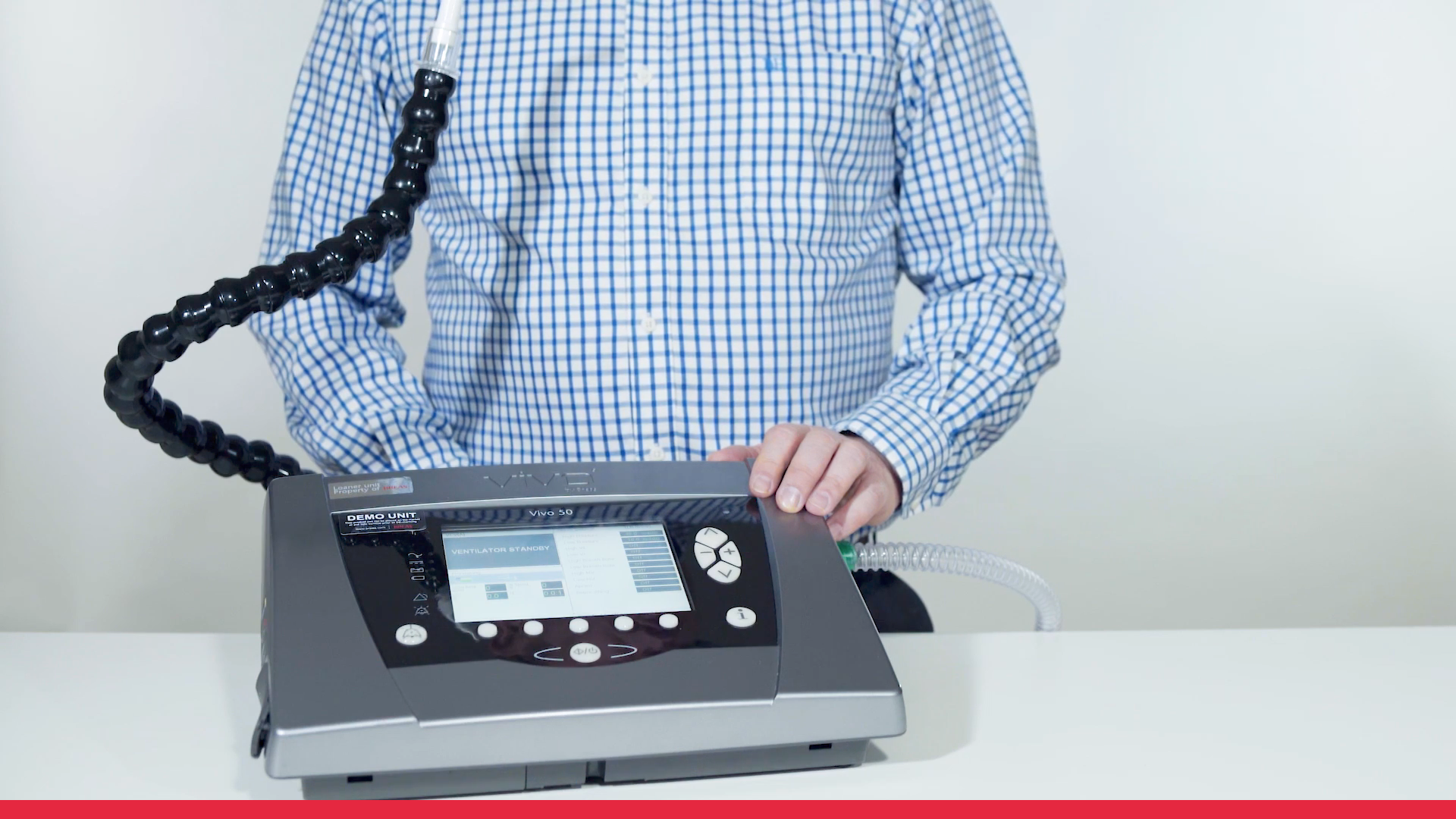 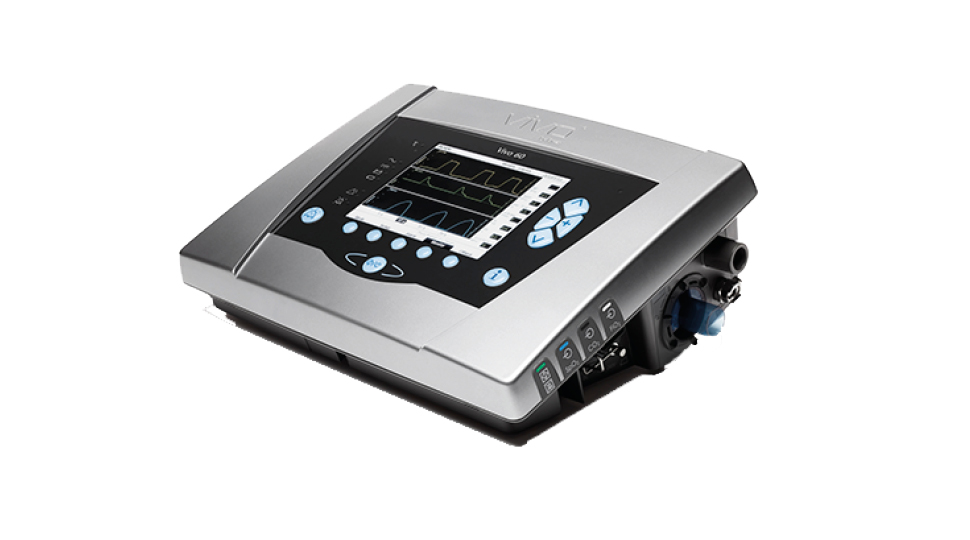 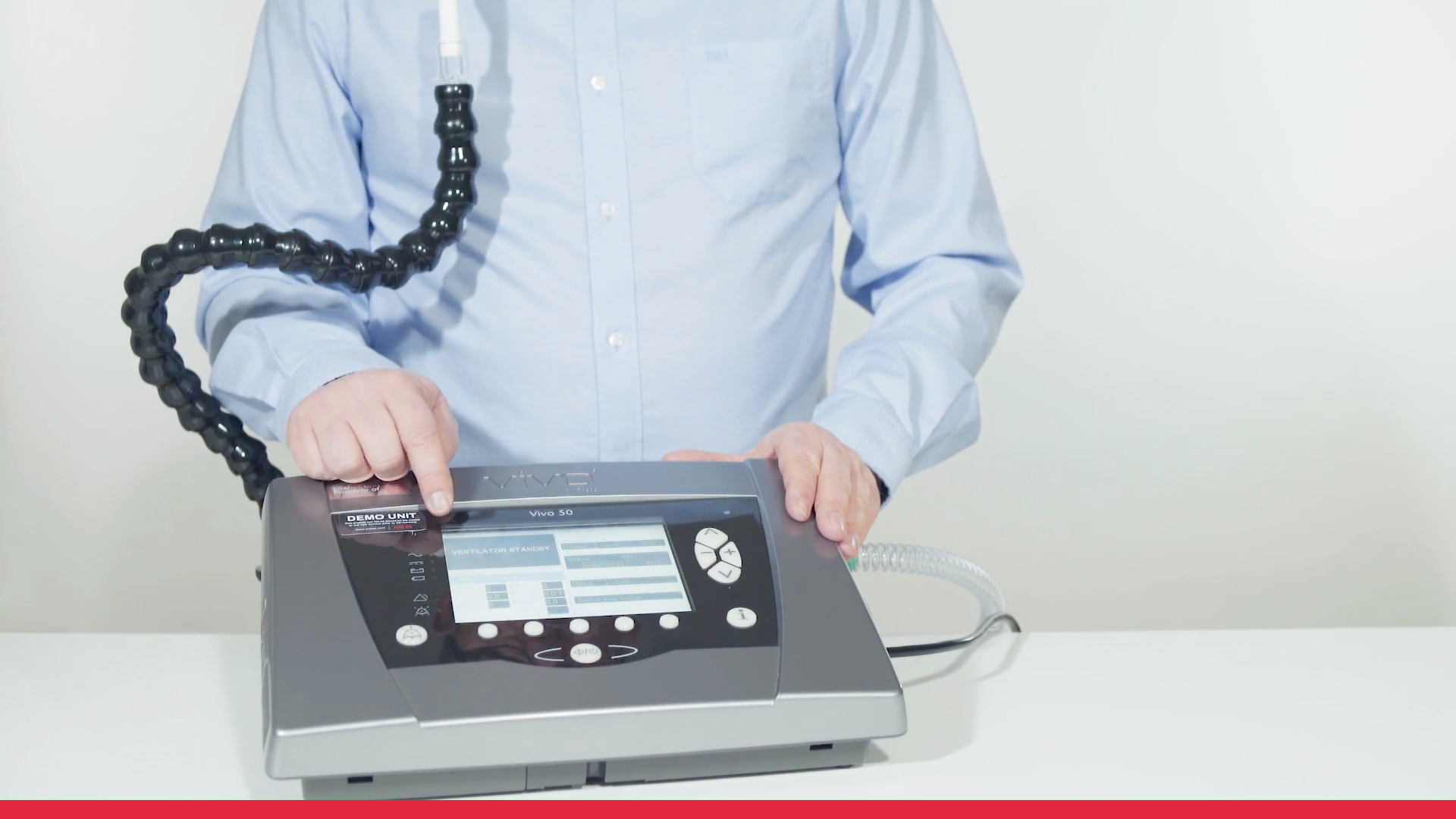 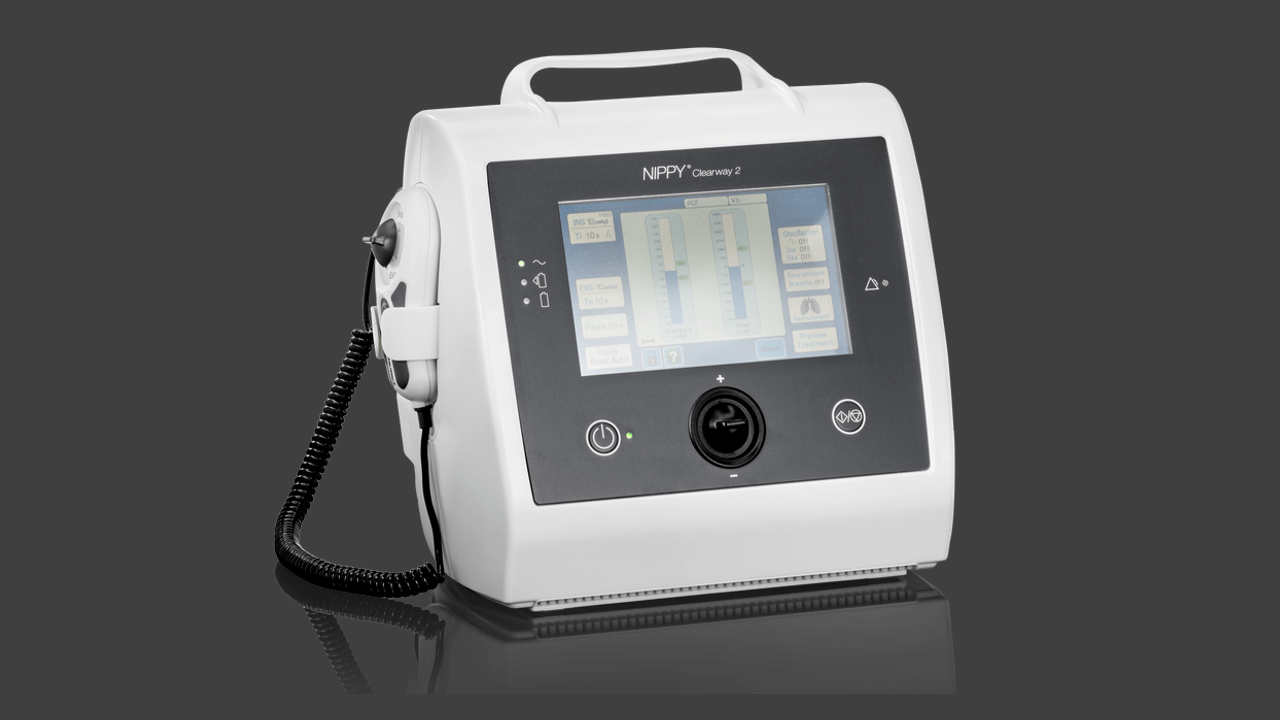 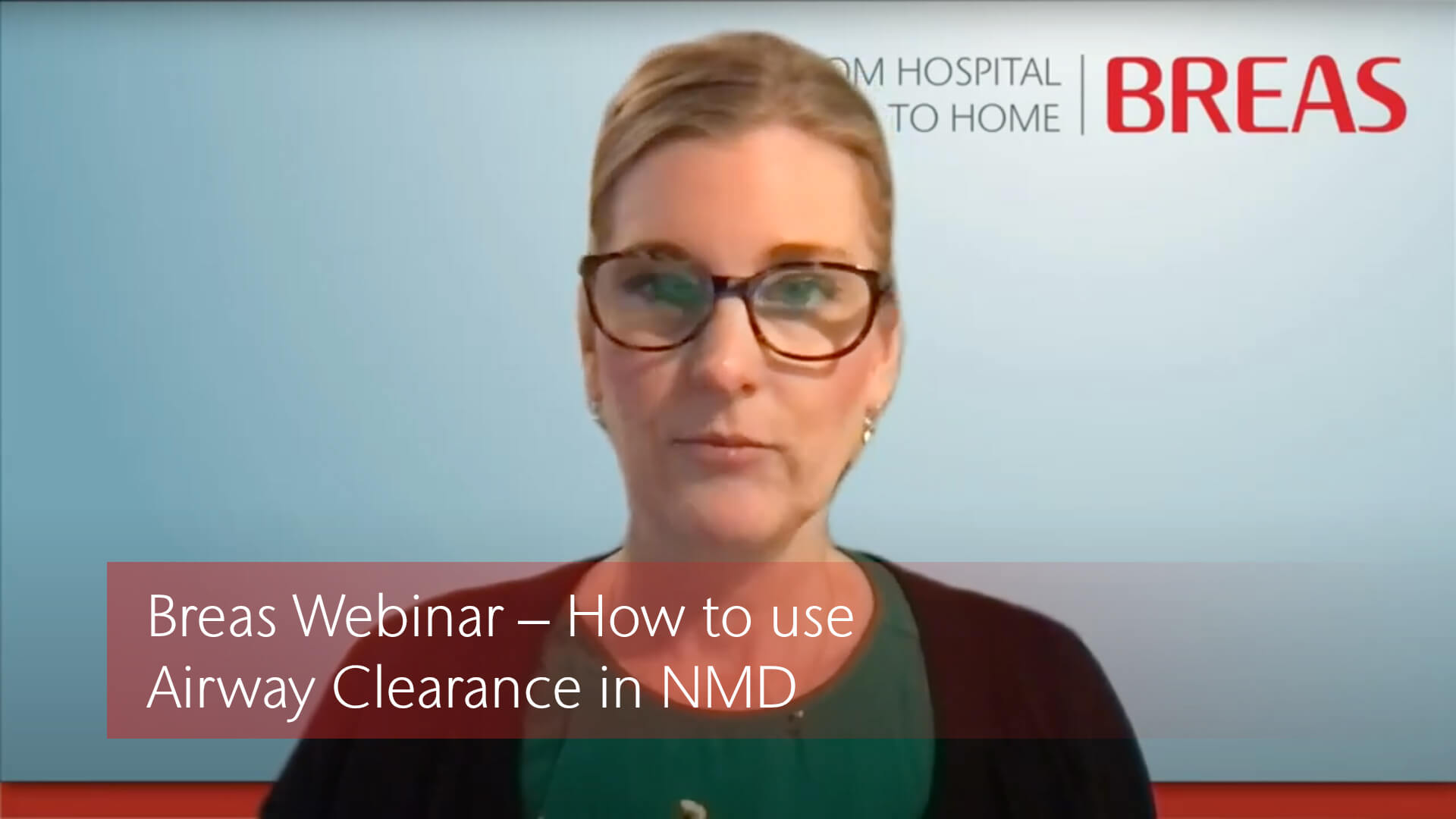 Breas Webinar – How to use Airway Clearance in NMD 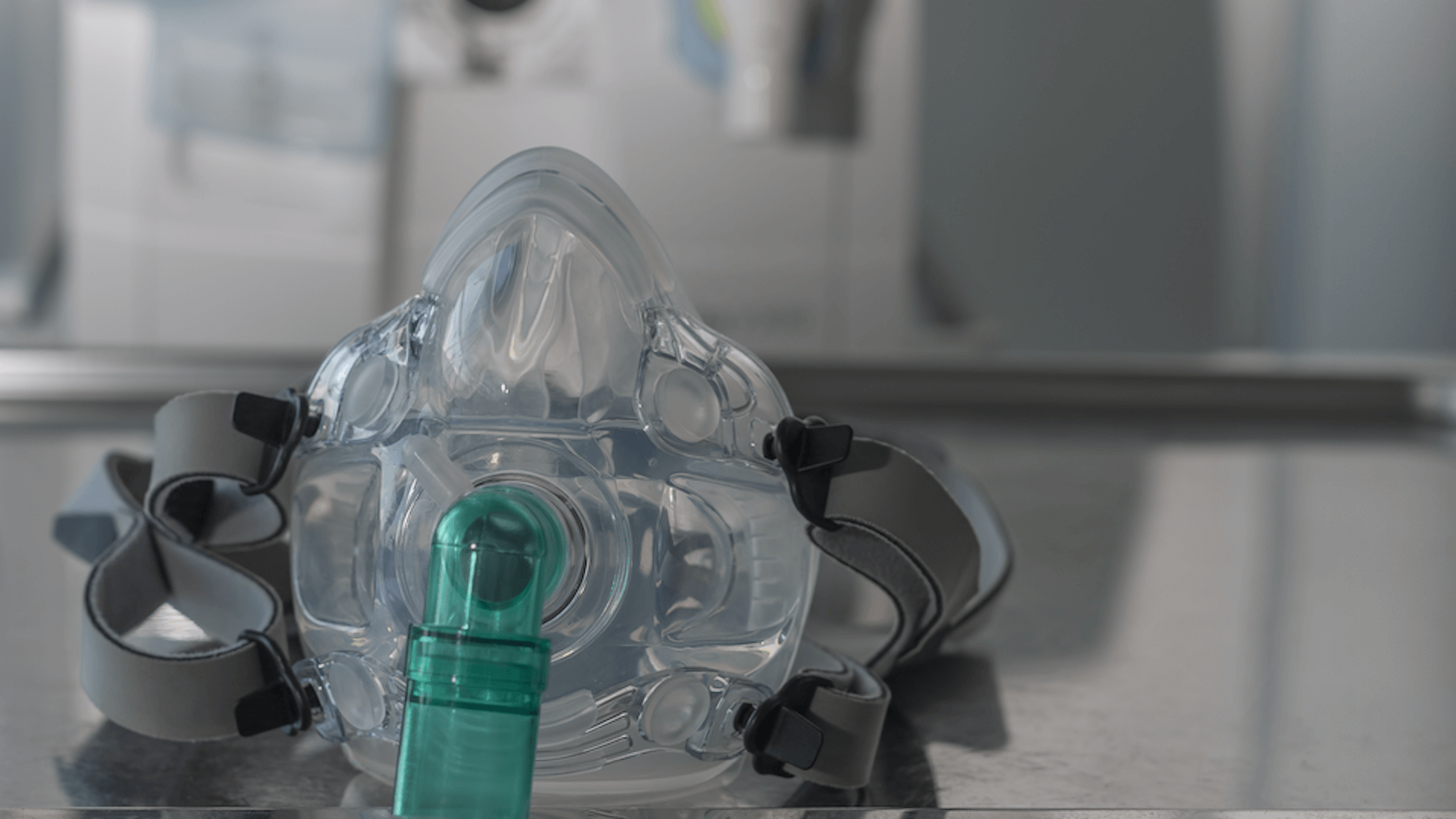 ERS Summary 1: The Role of Noninvasive Ventilation in Neuromuscular Disorde... 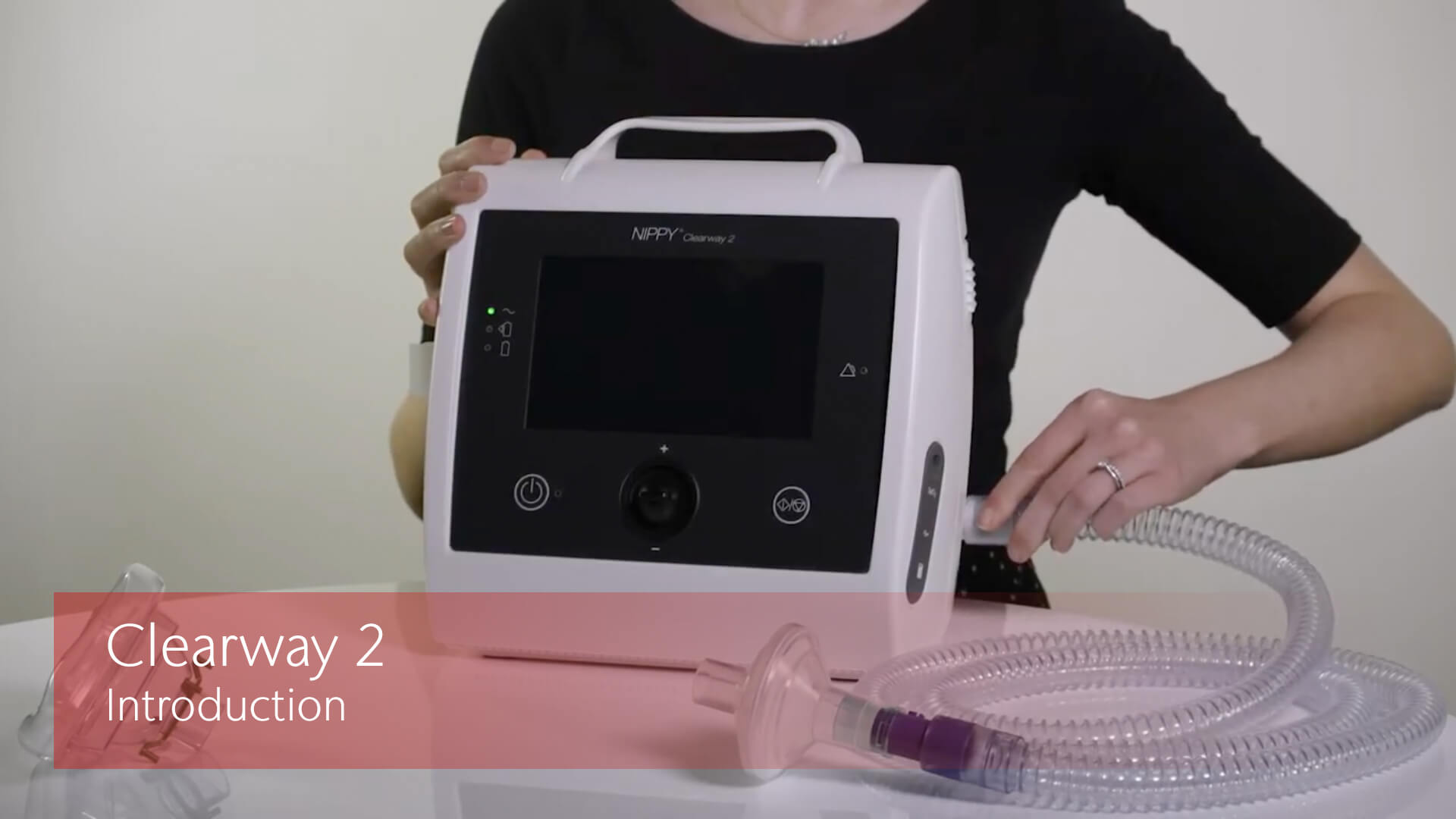 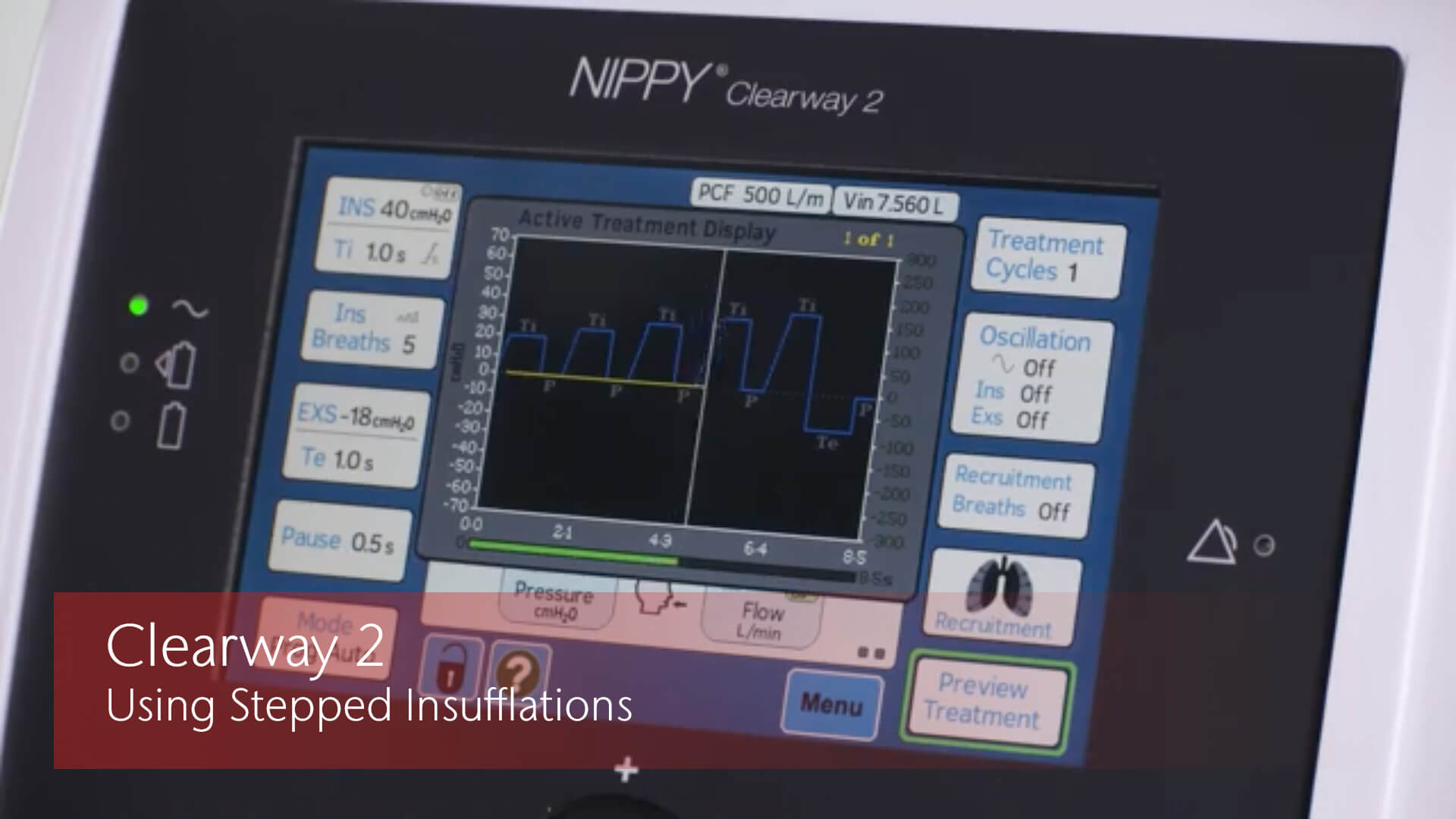 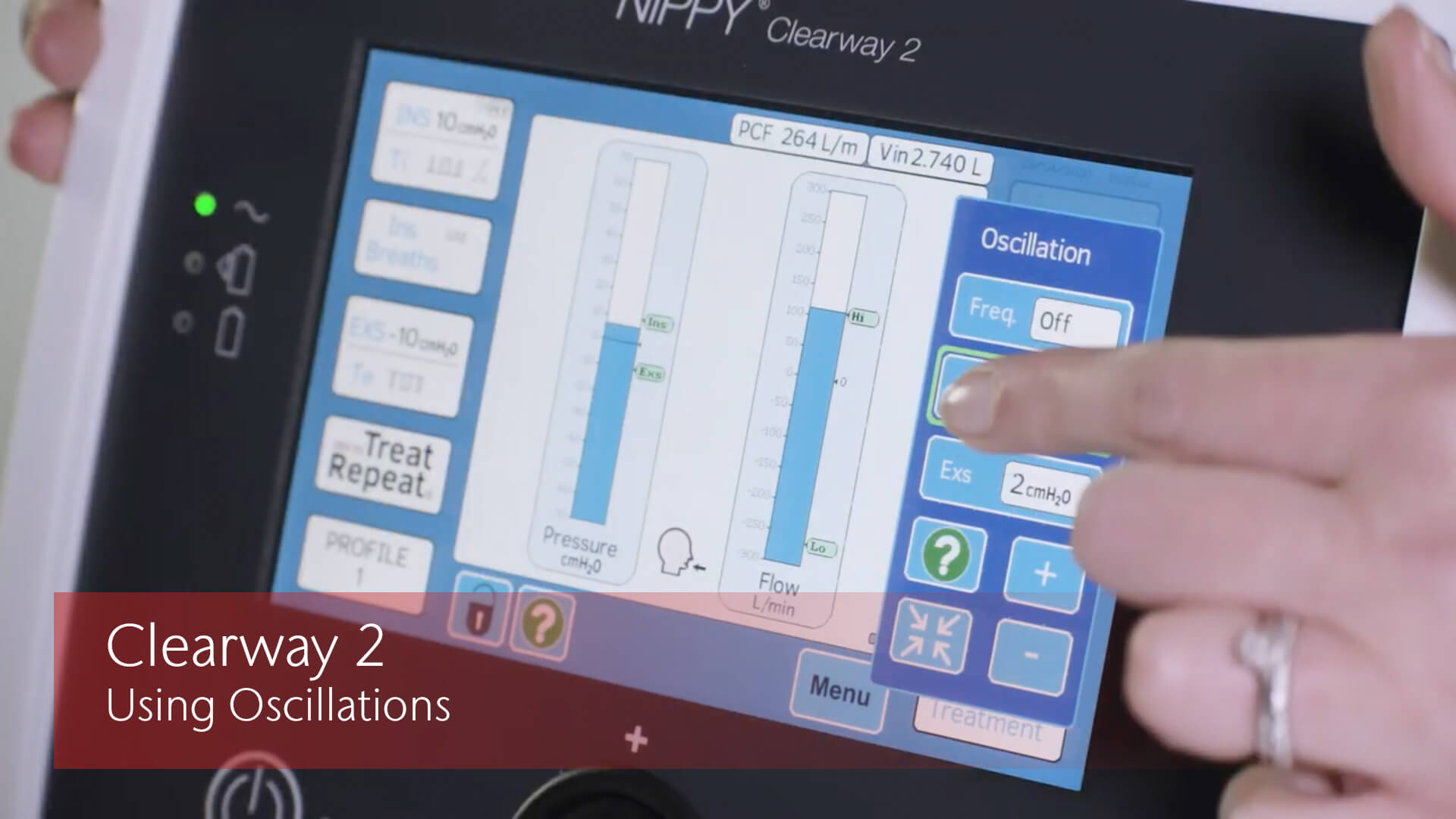 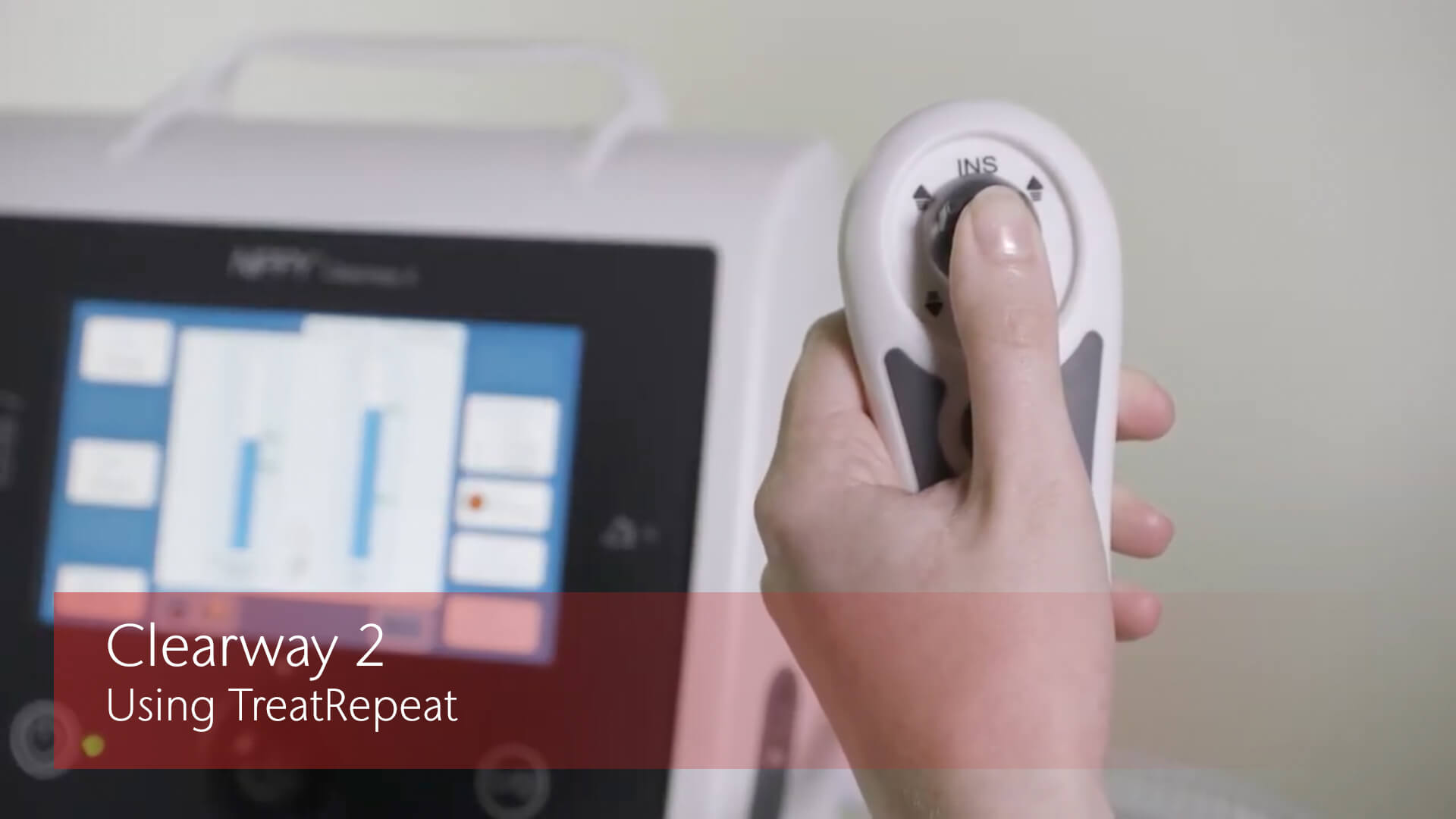 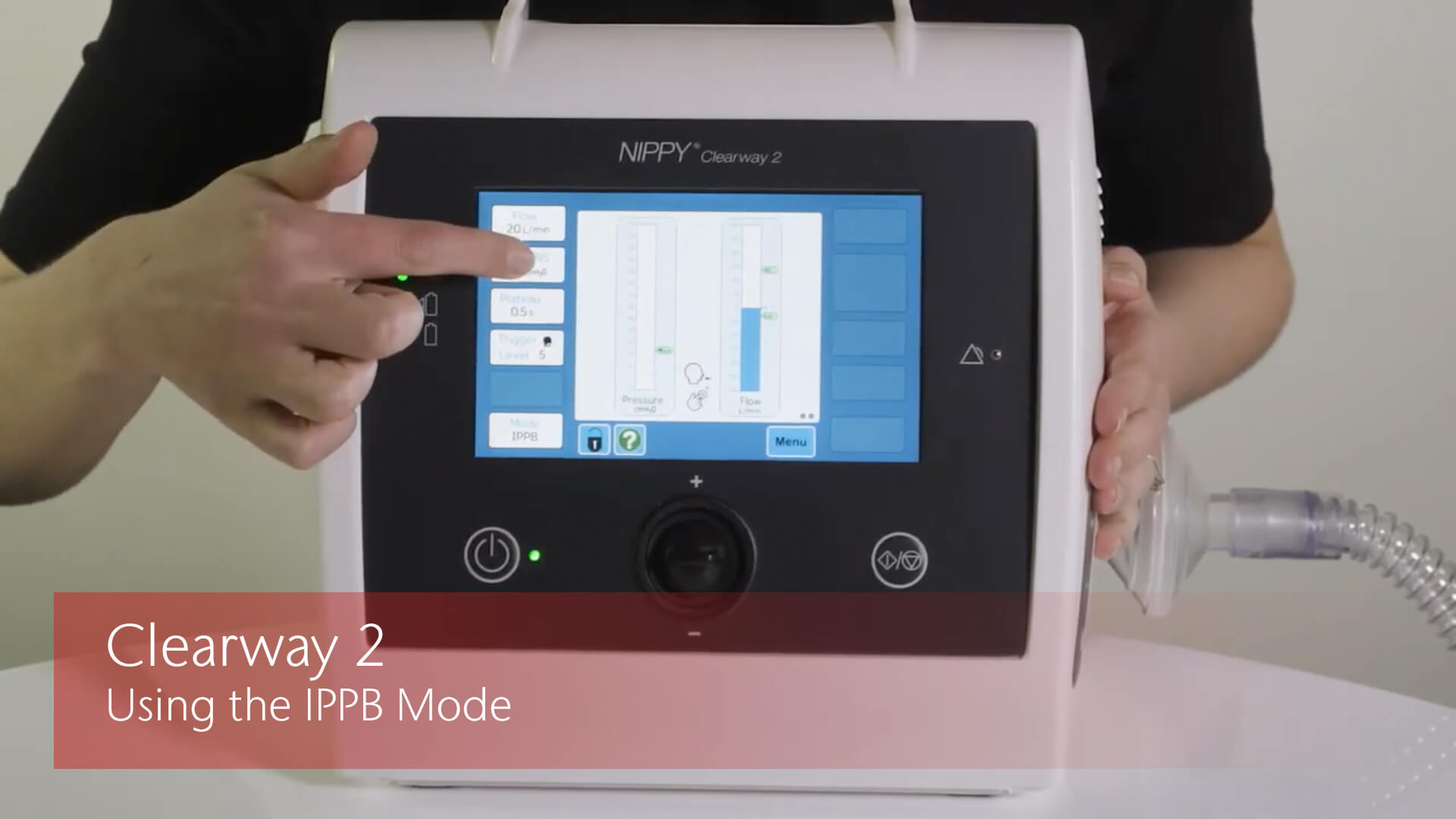 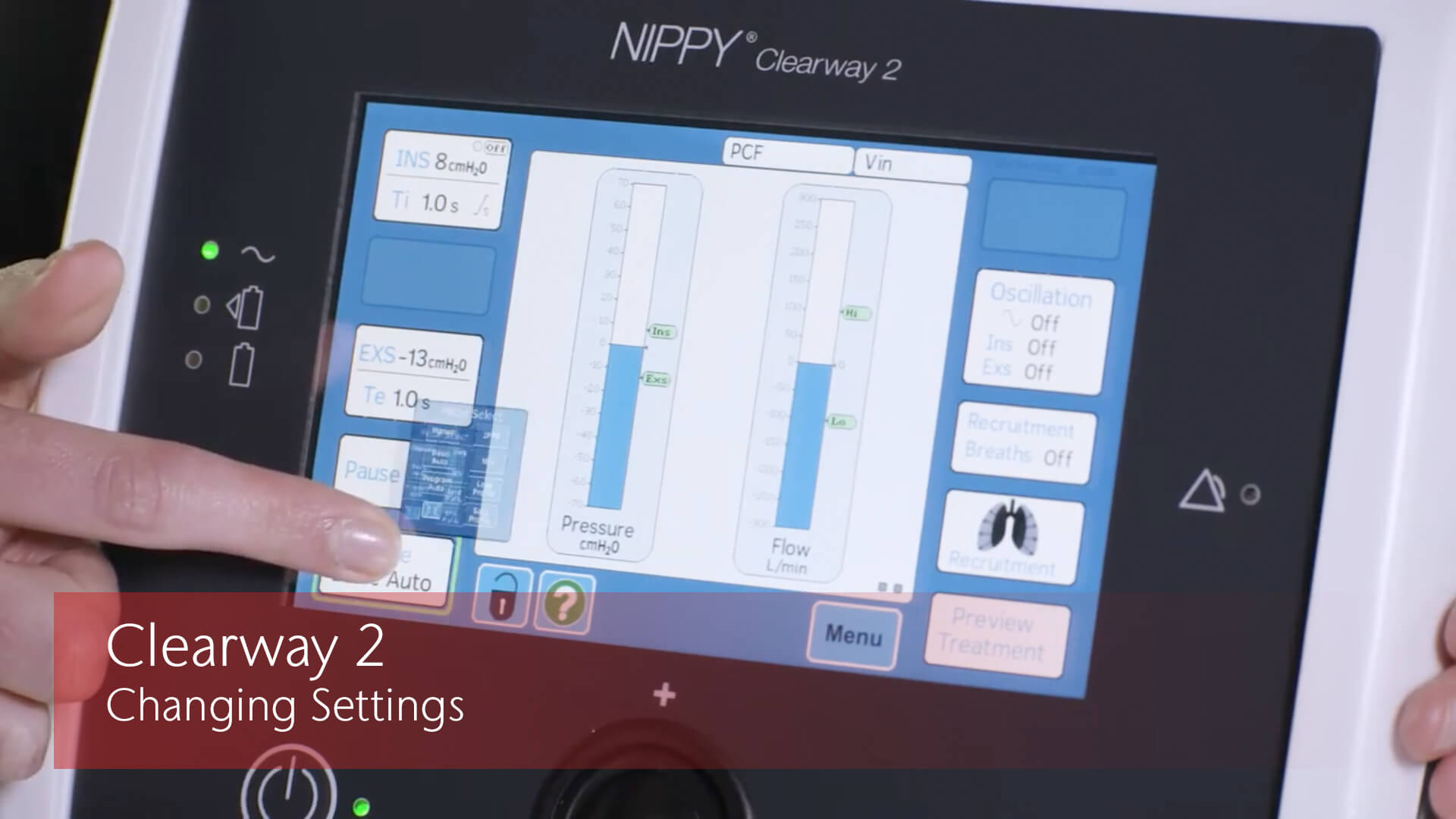